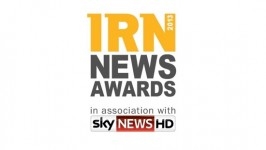 The event is to be hosted by Sky News and Sky Sports presenter Sarah-Jane Mee and will take place at the Century Club on London’s Shaftesbury Avenue.

Managing Director, Tim Molloy, said: “The IRNawards have become the place for commercial radio news teams to showcase their finest journalism. We have also added a new Rising Star category for student journalists keen to make their mark on the industry.

Across the board, the standard of entries has been extremely high and the judges have had their work cut out deciding who takes home the prizes.”

Rangers In Crisis: The Demise Of An Institution (Clyde 1 & Clyde 2)
Memories of 1948: What Was It Like Last Time? (Glide FM)
If Yorkshire Was A Country: Olympics 2012 (Yorkshire Radio)

Newsreader of the Year

Reporter of the Year

A Gold Award which recognises outstanding contribution to the commercial radio industry will also be presented on the night.