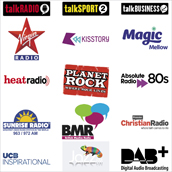 Today, a number of radio stations have launched on the new Sound Digital national DAB multiplex.

The majority of stations are already broadcasting, but just moving to the new platform, for example, Bauer owned Planet Rock and Absolute 80s. New UTV owned stations, Virgin Radio and talkRADIO are currently testing ahead of a full launch in March.

Stations now available via the new multiplex are:

The following new stations are due to launch on the multiplex next month:

We will keep you informed on any updates regarding these new stations, but if you have any questions feel free to get in touch!

In other DAB news, we mentioned a few weeks ago that Heart extra is now broadcasting nationally via D1 – another DAB multiplex.