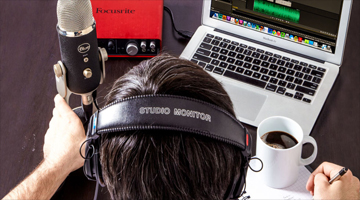 Podcasts are personal — and allow the right brands to whisper in consumer ears, too

In order to listen to a podcast, consumers must find and select a podcast, making an active decision to either download it or subscribe to it. And, further, most people listen to podcasts on portable devices, so they hear this content right in their ears, and that makes podcasts very personal content.

Gina Garrubbo, president and CEO of National Public Media, said “My initial thought on where podcasts fit into the media mix is there is a strong emotional connection. Once people start listening, it becomes their major way of consuming audio content. And it is a huge opportunity for sponsors to deliver messages in a very intimate, consuming environment. In world of 140 characters, people are listening to podcasts for an hour.”

The 3rd Make Some Noise event took place on Friday 7th October with a number of special programmes and fundraising broadcasting on Global branded stations. Across the group, £2.8m was raised with activities taking place in London and across the regions. Staff and volunteers dressed up as ‘loud’ as they could, including Ashley Tabor, Stephen Miron and Richard Park.

The “My” feature on the Capital FM app enables people to see the next 8 tracks playing and remove them before they play. There is no limit to the number of times a user can skip. Ads on the app are played out based on the length of time the user has been listening, rather than the number of songs or tracks skipped.
Separately, Global has also announced it has expanded its festival business through an increase stake in event organisers Broadwick Live. Global has also taken control of the events South West Four, Field Day, Boardmasters and Rewind Festival, which were previously owned by Impresario.