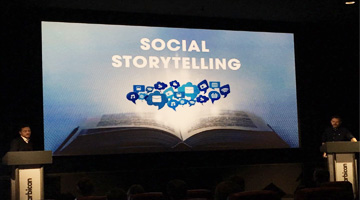 Global: “Digital audio is set to become a far bigger part of our lives”

Global’s IAB UK Digital Upfronts event was delivered via two informative sessions – one focused on the launch of its ‘social storytelling’ approach, and the second entitled ‘Mobile Moments That Matter’.

Global’s Digital Audio Exchange (DAX) pointed out that the medium is set to become
an even bigger part of people’s lives. It was also suggested that digital audio is the best way of consuming content while remaining mobile, with some 92% of listening done while partaking in another activity. Digital audio was therefore described as a ‘brilliant’ complementary channel and one which can be leveraged to deliver incremental reach, in combination with other channels and formats such as out-of-homeand TV.

Singer Will Young is to host a show on a pop-up jazz radio station alongside a star-studded line-up that includes Sir Van Morrison and Jamie Cullum.

BBC Music Jazz will see the broadcaster team up with Jazz FM in a 96-hour extravaganza showcasing the genre’s biggest stars as well as exploring its relationship with David Bowie.

Launching next month, the digital station will feature an-hour long show from Will, who shocked Strictly Come Dancing fans earlier this month after withdrawing from the popular BBC programme.

Independent commercial station Radio Plymouth has been awarded with the Best Professional Services title at a local awards event.

Former Real Radio Yorkshire Programme Director Ricky Durkin is joining Peak FM for breakfast.
Ricky started his radio career over twenty years ago as a sketch writer and voiceover artist, before becoming a presenter in 1994.