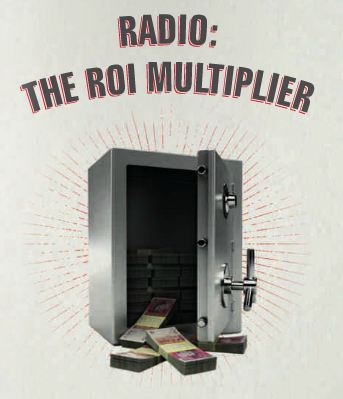 Here are 3 more findings that could have been headlines on their own:

Radio accounts for just 6.9% of the overall advertising market. This is despite the fact the latest IPA Touchpoints data reveals that across all media, 19% of time spent is consuming radio. If that wasn’t evidence enough for advertisers to increase their radio spend, the ROI research builds an even stronger case.

The study goes into further detail and broke down how reallocating budget from each medium can boost ROI. As a starting point from 9%, increasing campaign spend to 11% at the expense of online reaps in an extra 0.9% return. Doing the same from press but this time increasing radio’s ratio share to 14% raises the return on investment to 2.4%.

However more significantly, boosting radio spend to 22% alongside TV raises ROI by 19.3%.

There are three things certain in life: death, taxes and car adverts during the break of your favourite TV show. Car brands are some of the biggest advertising spenders in the UK and it’s not surprising to know that car sales have increased for 19 consecutive months.

The big names in the automotive industry can’t be accused of not utilising a multi-channel marketing strategy either. Open up any magazine or newspaper and you’ll no doubt see new car models adorned across often full page spreads. On the radio, your local car dealer has the latest model they’d like you to test drive.

The RAB report studied the average ROI of TV, press and radio advertising and found radio on top with £6, press second at £4.90 and TV, perhaps surprisingly, third on £3.70.

As noted in the report and discussed in more detail throughout the RAB’s previous study: ‘Radio: The Emotional Multiplier’, advertising has a bigger impact on listeners whilst they are engaged in the corresponding activity, therefore radio has the ability to reach consumers in-car, a place where press and TV can’t.
That’s not to say it’s only effective in-car. The visual limitation of radio is reducing with technological advancements, particularly with platforms such as Radioplayer’s multi-functional advertising space and Absolute Radio’s Instream service.

The best performing FMCG brand was on radio

You’d think there was a hair cleanliness epidemic, or at least dandruff was somehow lethal and must be avoided at all costs. As a FMCG, shampoo and other hair-care products are a mainstay of TV adverts, but this time it’s certainly more justified.

FMCG brands perform consistently well on TV, in fact the study concludes that TV boasts the highest ROI. It’s no surprise then that the RAB report highlights that over half of all FMCG marketing budgets are spent on TV at 57%.

However, the study also compared each medium’s best case study to highlight how well an advertiser has been able to utilise the platforms.
One FMCG campaign on radio managed to return a whopping £24 ROI, £2.20 more than the closest rival in TV. Unfortunately, the research used unbranded case studies therefore it’s hard to tell which brand flourished so comprehensively by using radio.

There is evidence here that FMCG brands can build successful campaigns on radio which buck the trend of the average (at £1.90). We can assume the advertiser in this case was able to apply radio’s best strengths (perhaps using the RAB’s 5 I’s criteria?) and avoided a typical and generic advert that is often the easiest but far-less effective use of the medium (and everyone’s time!).

These proposed headlines are by no means discrediting other mediums. Whilst we are champions of radio, ourselves and the RAB are huge advocates of using radio to boost campaigns alongside other mediums; it’s even in the title of the report, ‘Radio: The ROI Multiplier’.