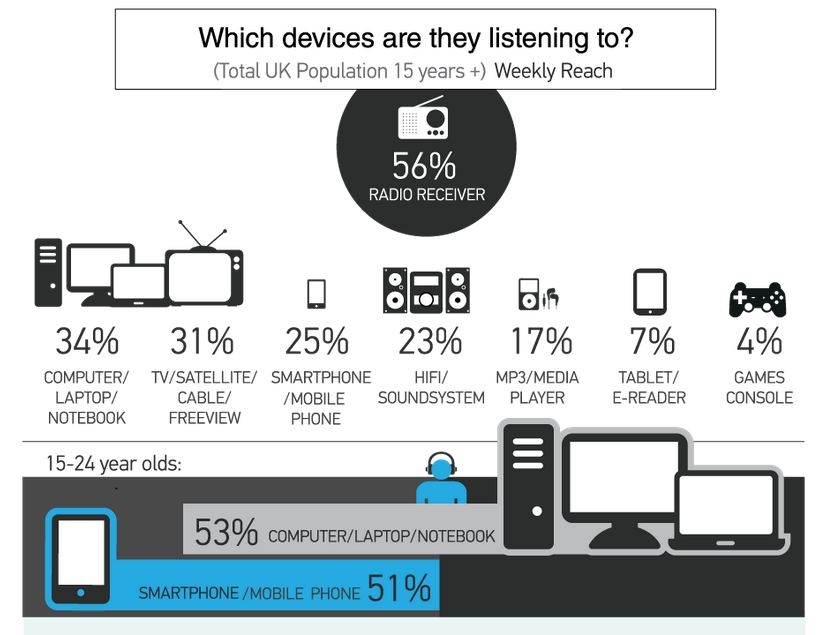 One of the things I’m currently involved in is the Internet Advertising Bureau’s (IAB) recently formed Audio Council. The council’s aim is to educate the market about the possibilities offered by advertising in an online audio environment through education, developing business models, and increasing value. The council consists of key players throughout the audio and radio sector including research company Audiencenet, who have just published the results of a survey which looks at audio consumption.

With a 3000-strong sample size, the research – called Audiometrics – has delivered some interesting results, the highlights of which I have compiled below, comparing them to the RAJAR stats where possible:

The Results: See the infographic for more

In an average week the Audiometrics research shows that 90% of people listen to audio content. Interestingly this figure matches the figure for weekly radio listening, which RAJAR Q1 13 (a survey of more than 100,000) delivers. Additionally the research shows 48% listen to audio or radio online and although this figure is very close to RAJAR’s 49.6% for All Digital listening (including DAB, DTV and online), it is significantly larger than the split of just 13% for people who say they listen online/via apps.

The significant difference between these two stats is likely to be down to the nature of the question – Audiometrics are measuring all audio, whereas RAJAR only measures radio listening. This suggests that the additional online listening could be to non-radio related audio such as streaming music.

Interestingly this section of the Audiometrics study also showed that 6% of people are listening to podcasts on a weekly basis and a further 4% listen to audiobooks. These figures are higher than I would have expected to see and it will be interesting to see how these figures perform in subsequent studies.

Audiometrics also looked in to the devices that people use to listen to audio in an average week. Against All adults the results showed that a radio receiver was the most popular, with 56% of people listening to audio this way, followed by a computer/laptop on 34%, via DTV on 31% and smartphones on 25%.

Hi-fi stereos appear to be becoming a thing of the past, as they dropped right down the scale with only 23% of people listening to audio this way. Probably not that surprisingly, the figures are very different against 15-24’s with 53% saying they listen via a computer/laptop every week and 51% through a mobile/smartphone.

And finally, when Audiometrics asked what people’s single preferred device for listening to audio was, the results were again split between ages. Across All Adults radio at 35%, was favoured but against teenagers it is the smartphone at 36%, or MP3 player 35% (with radio only delivering 3% to this group).

As part of the IAB’s Audio Council project, Audiencenet are extending their Audiometrics study to include attitudes towards online audio advertising.

Watch this space for an update on those results and if you have any questions in the meantime in regards to online audio, then please feel free to get in touch.