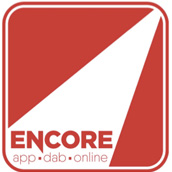 Encore Radio will also provide all the showbiz news, weather and other features listeners expect from their favourite radio station, together with a host of well known presenters, including Hollyoaks, Blue and West End Star Duncan James, national radio name Jamie Crick, who had a 20-year career as one of Classic FM’s best-known presenters, and TV and radio personality Liz Wickham.

The station’s weekly schedule includes several stand alone programmes featuring in-depth interviews with West End stars, broadcasts from opening nights and backstage news and gossip and reviews of the re- views of the shows.

Backed by major radio group UKRD, which owns and operates 14 local commercial radio stations with a further 8 services delivered via DAB, the station will have studios in London and Guildford.

Content Director Jamie Crick says “Britain has the most successful theatre industry in the world. Now finally there is a radio station catering for the huge number of people who visit the theatre or love the music from shows and films.”

Encore Radio will be available via DAB digital radio across London and the South East. You can also listen via its free app for tablets and smartphones or online via encoreradio.co.uk

If you want to know more about advertising options on Encore Radio, give us a call on 0207 907 0670. You can also become the launch partner of the station – further details can be found in the sponsorship opportunity of today’s newsletter.