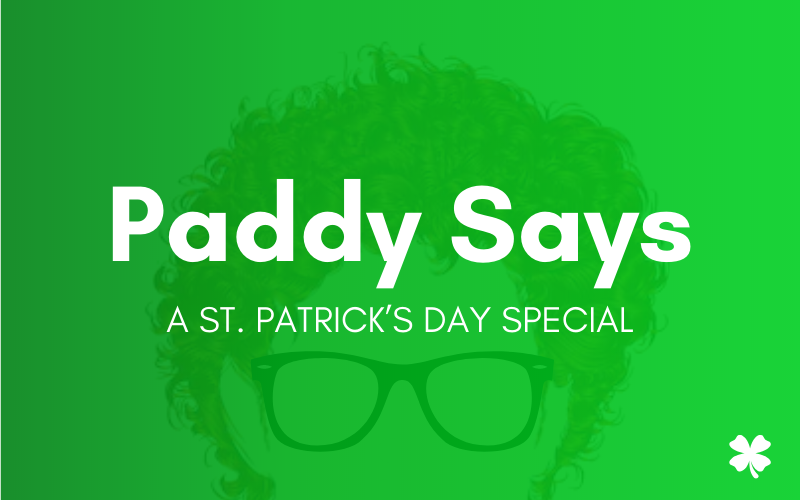 The annual celebration of St. Patrick’s Day is here. Though with parades and mass gatherings cancelled, things are indeed a little bit different this year. To help bring a touch of joy in these unprecedented times, we thought we’d celebrate Ireland’s National Day with a special edition of St Paddy Says.

That’s right folks, the potato radio is a thing! Some of you may remember electrical circuit building out of foods like potatoes, lemons and tomatoes at school. In the same way that these foods conduct electricity, the potato doubles up quite nicely as a DIY radio. Supposedly, all you need is a few household items, a hearty potato and bob’s your uncle.

Ireland loves podcasts! Recent studies show that one in three Irish people listen to a podcast every month, which isn’t surprising considering how rapidly more mainstream the medium has become. If you’re interested in listening to an Irish-made pod, here are five of the best according to RTÉ, Ireland’s National Television and Radio Broadcaster.

Irish radio began alongside a pivotal moment in Ireland’s history. There is a deep-rooted connection between the country’s independence and its inception of radio. Ireland was one the first in the world to adopt the medium and it continues to grow today. A prime example of this growth is Ireland’s recent unveiling of its first dedicated sports station. In 2019, Off The Ball launched a 24-hour sports radio station. Listeners now have access to top sports broadcasting 24/7. If you’re a fan of Irish sports commentary, definitely give this one a listen: https://www.offtheball.com/