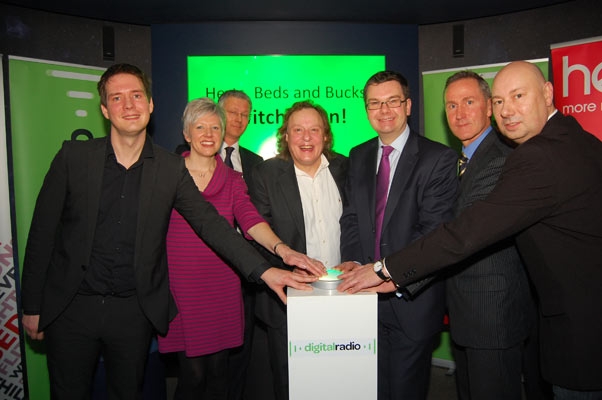 The switch-on comes just two days before FA Cup 6th round matches which will be broadcast on DAB digital radio.

Capital FM and MKFM are available for the first time in the area, and the reception of Gold will be much improved, as previously it has only been available on medium wave. This improvement in local digital coverage is part of a major Government and radio industry investment in building local digital radio coverage across the UK.

The switch-on was also marked by a unique collaboration between public and commercial broadcasters, as BBC Three Counties Radio, Heart, MKFM and Connect FM broadcast live from the National Radio Centre at Bletchley Park on Valentine’s Day.

MK Dons’ Chairman Pete Winkelman said: “This is excellent news for radio and football lovers in the area who will now be able to enjoy coverage of the top local matches in digital quality sound for the first time.”

Broadcast Minister Ed Vaizey said: “Boosting local coverage for Hertfordshire, Bedfordshire and Buckinghamshire means the excellent range of local DAB digital radio stations can be received by even more listeners, at home and in their car.”

Ford Ennals, CEO of Digital Radio UK, who hosted the event, said: “This is a great Valentine’s Day present for 1.8 million people and is the largest local DAB switch-on in the UK. Half of the homes in Hertfordshire, Berkshire and Buckinghamshire already have a digital radio, but until now they have not been able receive their favourite local stations on DAB.”

The four new transmitters at Sandy Heath, Epping Green, Zouches Farm and Bow Brickhill take local digital radio coverage from zero to 67.7% of households, and bring local DAB digital radio to the three counties including Luton, Milton Keynes and Aylesbury for the first time. The transmitters at Sandy Heath, Zouches Farm and Bow Brickhill were switched on today, and Epping Green will follow in one week’s time.

To receive the new services, listeners with digital radios may have to re-tune their sets. Find out more at getdigitalradio.com/retune

Digital radios are increasingly becoming available in cars and according to industry data, one third of all new cars now has digital radio fitted as standard. One of the major leaders of digital radio in car has been Luton-based firm Vauxhall who are now planning to fit all new Vauxhall models with digital radio, and are offering digital radio adapters for all existing cars via their franchise dealer network.

Listeners can check what stations they can receive at getdigitalradio.com

This switch-on comes as the Government has said they will make a decision on radio switchover later in 2013. This follows the completion of the successful digital TV switchover in the three counties area in 2011 (nationally in 2012). 42% of homes nationally have a DAB digital radio and digital radio sales reached the second highest level ever, with over 2 million sets sold. According to GfK, a cumulative total of 16 million digital radio sets has been sold to date in the UK, including DAB radios and internet radios.

The radio industry communications campaign featuring digital radio evangelist D Love who encourages everyone to spread the love for digital radio this spring is currently on air on BBC TV, BBC radio and commercial radio.

Paul Eaton, Director of Digital Radio at Arqiva said: “We’re delighted to be able to bring these services to digital radio in Hertfordshire, Bedfordshire and Buckinghamshire. Research has shown how much people value their local radio stations, so we hope this will make a big difference to the digital radio listening experience in the county”.

A spokesperson for Global Radio, owners of Heart, Capital FM and Gold, said: “We are committed to extending digital coverage through local transmitters across the UK and today’s switch on, which gives 1.8 million listeners access to our stations on DAB, is another important step for our industry.”