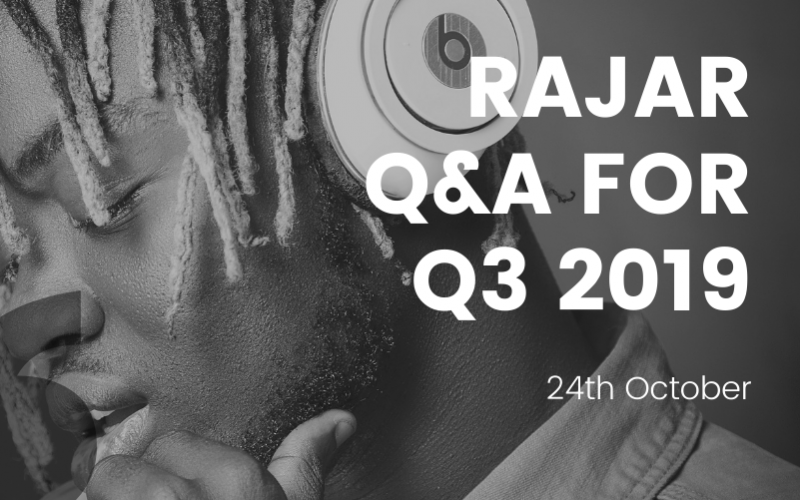 What did we think of the RAJAR Q3 2019 results? Our Marketing and Insights team talk through this quarter’s figures.

Who has won the BBC/Commercial Radio battle in Q3 2019?

Commercial Radio reigns supreme as it celebrates its eleventh consecutive quarter ahead with 36m weekly listeners vs the BBC’s 33m.

Which Radio station is your RAJAR hero?

This quarter, it’s got to be talkRADIO!

Today’s dramatic political climate is creating a strong thirst for news and current events amongst listeners. talkRADIO has maximised this opportunity to engage with its audience by reporting the latest Brexit bulletins.

talkRADIO’s line up of outspoken hosts are often creating as much news as they report. By doing so, they have broadened their audience adding 57% more listeners year-on-year. Although its current 409k weekly listeners is relatively small when compared with LBC and BBC Four, the large spike in listenership suggests that the station’s recipe is one that is leading it on a path of continued future success.

Over the past year, talkRADIO has also reported news beyond Brexit. This includes late night host, Iain Lee’s heroic endeavour in saving a Man’s life during his show in December. Julia Hartley-Brewer also regularly guests on Question Time, showcasing her political brand to new audiences.

The importance of radio as a source of news is reflected in the Radiocentre’s 2018 study ‘Breaking News’. The study found that 77% of UK adults consider radio as a more trustworthy source of news than any other media. In the next year we expect talkRADIO and other speech stations to continue growing, especially with key political events on the horizon such as the US elections and continuing Brexit negotiations.

Heart breakfast is waking up to some good news as they are now officially the biggest National Commercial Station. The brand now reaching 9.8m weekly listeners, which is up quarter-on-quarter (1%) and year-on-year (1.5%).

Absolute Network has gone up to 4.9m listeners, thanks to adding 60s and 00s to the RAJAR mix. Dave Berry also celebrates as his Breakfast show achieves its highest ever reach with 2.2m.

Union JACK radio has seen its audience increase 66% year-on-year to 184k, and Jack Radio, the newest addition to the Jack portfolio, enjoyed a 16% quarter-on-quarter increase to 145k weekly listeners.

In the battle of Scottish stations, Clyde 1 holds the top spot with 601k listeners, up 8k listeners from last quarter. Capital Scotland declined slightly to 513k listeners but remains ahead of Heart Scotland with 423k listeners.

We’re seeing great numbers from local stations as More Radio in Sussex grew its audience 80.4% quarter on quarter (5.6% year on year) to 49k. The team will be popping the champagne as they achieved their highest ever hours 16.4 (258.2% increase year on year). Sam FM South Coast too celebrates with an increased reach, both quarterly and yearly, of 182k (+8.8% & +4%).

How would you describe Digital Radio’s RAJAR Q3 2019 results?

It’s hard to ignore, digital listening is huge! With 65% of the population tuning in to digital radio every week, up 2.1% year on year. Total hours account for 562m and 56.8% listening share, thus further strengthening digitals dominance. Majority of digital listening is done via a DAB device 51.8%, followed by Online/Apps 25.1% and DTV 12%. However, it was listening via online and apps that grew significantly with a 30% increase to 29.4m hours and now accounts for 13% of all listening.

27% of adults claim to listen to Live Radio via a Smartphone or Tablet at least once per month, with 15-24 adults leading the way with 32.9%.

Voice-activated speakers are infiltrating our homes, with 28% of adults claim to own a device and 18% use them daily. These gadgets provide new listening opportunities for audiences, as Radiocentre research getting vocal found that 77% of owners use it mostly for the radio. With the upcoming festive season, we expect more households to own a Voice-activated Speaker, as these gadgets are popular ticket items during this period.

As mentioned previously the gang at Country Hits radio will be celebrating with 234k listeners, up 11% since their first RAJAR figures last quarter. Kisstory remains the largest digital-only station with 2.6m, solidifying their position adding 231k new listeners. Heart 80’s is hot on Absolute 80s tail with 1.7m and 1.8m listeners respectively.